"What is art?
No-one seems to know,
but everyone has an opinion.” 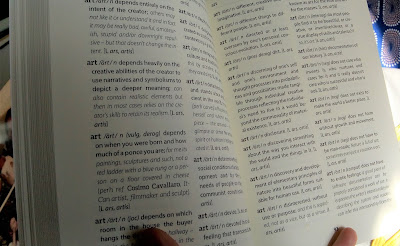 Curse you Robert Good! If only you had published your book when I first started Art School! How much more illuminated my traversing of the path into territory unknown could have been, had I been enlightened by the collected perceptions, definitions and opinions collated in, A New Dictionary of Art. Hours at the easel, days spent scratching and scrapping the application of paint on the walls and floors as I drew, painted, filmed, shot, did, didn’t read, wrote, whittled and weaved my way through the potential of all the things art can be; all in the fractious pursuit of creativity, expression, communication and somewhere at the back of all those reasons a deeper searching, a desire to figure-out what exactly, is art?


And am, in many ways, still blissfully non-the-wiser.


Language and word-based artist Robert Good’s book offers some 3000 definitions of art, ‘compiled from the internet, established authorities, artists and institutions’. This ambitiously mad plight of collecting and organising so many definitions reveals (what the author himself acknowledges) much of what we may already expect, that art is and can be almost anything and everything!


Definitions in this book really do include everything from, the literal/descriptive, ‘Music, literature and cinema’ to the metaphysical, ‘a way for people to put something out there that cannot be said in words’ and the entertainingly specific, ‘like a strawberry cake’ as plausible options in answer to the question of ‘what is art?’ But how much does anyone really want to know? 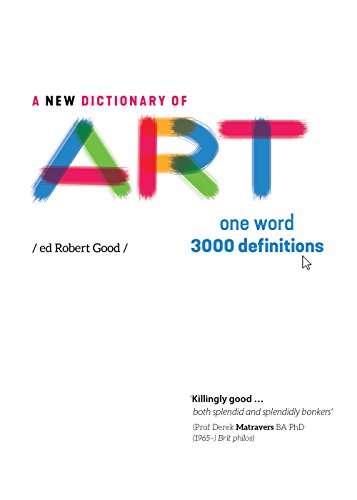 That being said, Good’s book is a superfluous testament to a commitment in documenting the sheer range of amusing, absurd, arrogant, informed, spiritual and historically defining ways in which artists, makers, viewers of art, writers, philosophers, critics, curators and more have created their own definitions as to what art is. Many of which, historically speaking, have influenced the course of art history and what we perceive ‘art’ to be. Or...not to be! The book includes Duchampian statements of art being, ‘what the artist says is art’ to that of Surrealism ‘Transformed from the real to the unreal’. The chicken and the egg moment being which came first, the definition of art or the work itself, when to some extent I question how easy it is for one to exist without the other. It all becomes a bit conceptual and reminds me of Sol Le Witt’s ‘Sentences on Conceptual Art’ (1928) in which the final sentence reads, ‘These sentences comment on art, but are not art.’ I have always found this to be a paradoxical thing to say because it seems that others have interpreted this as ‘art’ even though that was not Sol Le Witt’s original intention (or was it?). The mind boggles.


From my perspective, art is something that is usually best discovered through actively ‘doing’ and experiencing it through seeing it, taking-part or making it rather than, on first instance, attempting to understand it through reading pre-set definitions. I do not think people need a comprehension of what ‘art’ is in order to produce something that is then perceived as being art. In fact, from personal experience, the latter is often the better and the closer one is, ‘not trying’ to make art, often results in work which is less contrived and more genuine.


The book’s biggest problem and also its charm is the question of whether what is presented here are a series of definitions or opinions. In-reality it seems that it is a mixture of both and one could argue the semantics of what is the ‘definition of definition’ as opposed to an opinion but then we would still end up in a subjective state as this very book is trying to address. The appeal of this is that established definitions from the likes of critics, Clive Bell and Arthur Danto are anonymously embedded amongst definitions from everyday people online. It has no hierarchy! Which is refreshing. Though overall it depends on how seriously or not you want to take this book when, for example, art defined as, ‘Largely a load of old cobblers and a big sham’ and ‘Like a mirror which reflects our inner selves’; ‘that piece of light in your pupils’, as confrontational or poetic as they are still seem much more like opinions/beliefs than definitions to me...in my humble opinion, of course!

There is nothing wrong with this but part of me still cannot shake-off the question of whether this book is really necessary if nothing other than a light-hearted piece of satire? Sometimes it falls into repetition of saying the same thing but worded in slightly different ways which also slightly weakens its argument, but on the other-hand, also demonstrates the individual subjectivism involved in interpreting what art is; as being something unique and personal to us all as individuals but with certain themes, symbols, readings that are inherently more universal. In the book’s opening introduction by Professor in aesthetics and philosophy of the mind, Derek Matravers’ offers an interesting viewpoint to what Good has produced as a whole,


And for those reasons A New Dictionary of Art almost offers inspiration in its celebration of diversity and the way in which art is its own language of multifaceted readings. That it rebelliously seeks to continuously deify categorisation! Some may even see it as a manifesto that art must never become definable and resist categorisation least it become stagnant but it is also a celebration of the things people find similar and different about art such as, ‘a desire to convey meaning’; ‘someone’s vision shared with others’; ‘from the world around us’.


For want of a better word, some of these ‘definitions’ at their best, offer brilliant starting points for thinking about ways of making work, generating ideas and opening-the-box on proliferating the possibilities of what art can be, a few examples, ‘Does not have to be man-made’; ‘Does not form without growth and movement’; ‘The opportunity for love between strangers’; ‘progressive’; ‘tilling the soil of culture’. Anyone of these and hundreds of others besides demonstrate some of the potential and scope of what the arts are/can be. There are so many it is almost harder to articulate what isn’t art than what it is! And it is certainly something that I am sure will only continue to grow with time.

'A New Dictionary of Art' by Robert Good is available to buy now (at all good bookshops!)
http://www.robertgood.co.uk/

Posted by Natalie Parsley at 05:52